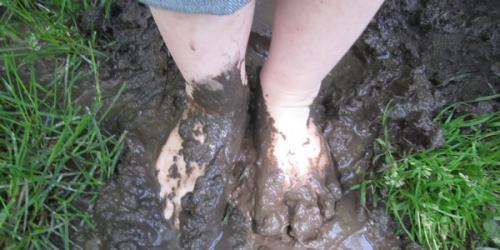 Washing one another's feet is a time-honored practice that is supposed to instill in the participants a sense of humbleness, service, gentleness, kindness, meekness, closeness and all that other good stuff. But who knows where that other's person foot has been? There's other stuff like dirt, germs and flesh-eating bacteria, too, you know. Here's how to wash feet with the least amount of human contact. (Photo via http://www.thinkplaytoday.com/wpuploads/2012/05/kid-feet-in-mud.jpg)