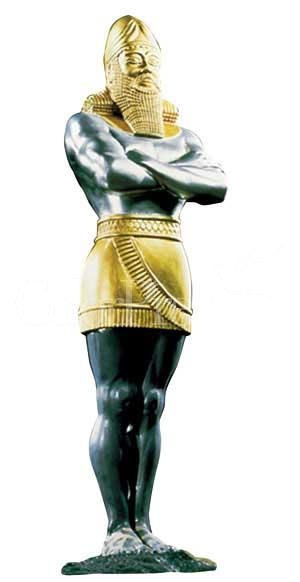 OXFORD, Mich. — Hundreds of Adventists stormed out of evangelist Steve Darmondy’s prophecy seminar held at Maple Lane Adventist Church last night. The exit was prompted by what several attendees described as a miniskirt on Darmondy’s illustration of the statue from Nebuchadnezzar’s statue in Daniel 2.

“I couldn’t believe my eyes,” said Maple Lane Head Elder, Ernie McNevins. “After special music, Pastor Darmondy got up to speak and his first PowerPoint slide was of Nebuchadnezzar’s statue wearing the skimpiest skirt I’ve seen in years.”

McNevins said that within seconds of seeing the slide he grabbed his wife, shielded his young children’s eyes and headed for the back doors of the auditorium. “I am not going to sit around and watch as worldly dress creeps its way into the church,” said McNevins.

Even church youth were confused by the statue illustration. Rebecca Dos Santos, a student at the local Junior Academy, said, “Every time I wear a skirt to church, I am scrutinized and asked to put my arms to my side, to make sure my fingertips don’t go past my hem. When I kneel to pray, I’d better not be showing any thigh. There’s no way any human wearing the skirt on that statue could have gotten past our church’s rigorous modesty standards.”

Responding to the controversy, Pastor Darmondy expressed his surprise at the reaction of the seminar attendees. “I just don’t understand,” he said. “I’ve used this banner for every seminar I’ve preached since the mid-80’s. If anything, I’d think people would complain that I’m being unoriginal. But inappropriate? I think our churches have become hypersensitive in recent years.”

Special thanks to Zachary Payne for the guest post.