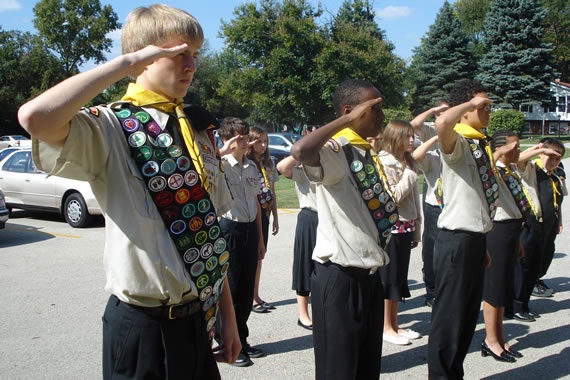 None of these Pathfinders have any idea what it means to “keep a level eye.”

SILVER SPRING, Md. — World Pathfinder leaders are raising the alarm following the results of an international survey of Pathfinders. “Absolutely nobody knows what it means to “keep a level eye,” said World Pathfinder Director Tim Nix, referencing the well-known phrase from the Pathfinder Law.

When asked to explain the phrase, Pathfinders from Maine to Malawi “took wildly creative stabs at explaining it,” said Nix. “We got answers ranging from the importance of good eye contact to the futility of bringing contact lenses to camporees.”

Nix said that after traveling the globe and systematically testing 20 Pathfinders per country on their understanding of the Pathfinder Law, the consistent result was complete ignorance. “Twenty in twenty Pathfinders don’t have the foggiest clue what they are reciting,” reported Nix.

Leaders are unsure how to proceed. “We’ve essentially reached the point where at least part of the Pathfinder law has taken the form of vain repetitions that scripture expressly warns us against,” said Nix.

“Outdated terminology is a huge problem in Adventism,” claimed the Pathfinder leader. “As our Pathfinders have demonstrated, not even we ourselves know what we are talking about at times.”

Nix has vowed to put together an advisory committee to draft up an updated version of the Pathfinder Pledge and Law. “I’ll be appointing committee members as soon as I myself have confirmed the meaning of ‘keep a level eye.'”